Amateur radio direction finding (ARDF)—also called Radio Orienteering, foxhunting, or transmitter hunting—can take many forms. The game described here has been standardized and fostered by the International Amateur Radio Union since about 1978. The object is to locate and visit on foot each of up to five transmitters concealed in a wooded area in as short a time as possible by using a directional receiver to obtain bearings to the transmitters. The transmitters (foxes) all transmit on the same frequency, but take turns transmitting a unique signal for one minute and are silent for 4 minutes while the others transmit.

The skills needed to succeed include obtaining accurate bearings with the receiving gear, navigating through the wooded area using map and compass, and devising a strategy to visit the required sites in the minimum time.

See Figure 1 for a (schematic) course layout. The hidden transmitters, foxes, will be located so that the associated marker flag (control) can be seen when the hunter is within about 3m of the transmitter; they will be at least 400m apart; no fox will be nearer than 750m from the start. A homing beacon on a different frequency from the foxes is located at the entrance to the finish corridor. 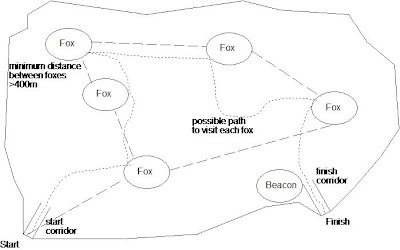 Each fox will transmit a signal with a unique pattern that identifies which transmitter it is. The standard patterns are incidentally slow Morse code characters, but you do not need to know that to understand which fox is on. The signals have two long (dashes), three long (dashes), then followed either by one short (dot), two short, three short, four short, or five shorts to indicate fox 1, 2, 3, 4, or 5 respectively. In addition to the transmitted patterns, a fox can also be identified by the time it is on: fox 1 transmits in minute 1, fox 2 in minute 2, and so on. The beacon transmitter sends two long, three long, continuously. Finally, to comply with radio regulations, the transmitters will also send an amateur radio call sign in rapid morse code at the beginning of each transmission.

Prior to any competitor being on the course or starting of the foxes, it is usual to gather the receivers in a quarantine area near the start. When there are many competitors, they will be divided into groups of 3 to 10 and the groups start at 5 minute intervals to spread competitors out in time. A few minutes before the start, the competitors will receive a map of the area and any last-minute info about the course and will pick up their receiver from the quarantine. The receivers must remain turned off while awaiting start.

The hunter will leave the start position when instructed to do so, go to the end of the marked start corridor (about 100m long), turn on the receiver after passing the end of the corridor and begin to locate the foxes. At each fox, the hunter will punch his score card with that fox's unique punch to prove having visited that fox. After locating all the foxes required, or as many of them as there is time for, the hunter exits the course via the marked finish corridor.
The time elapsed from leaving the start position until reaching the finish line is recorded along with the number of transmitters successfully located to determine the hunter's standing with respect to others in his category. The standing is first among those finding all of the required foxes in the shortest time, then among those finding one fewer fox, etc. Those not returning to the finish within the maximum time limit (2 hours, typically) are disqualified.
To be continued ... Receivers ...
Posted by BCRadioSport - ARDF Canada at 11:22 PM