The course should be setup so that all of the foxes are audible from the end of the start corridor, so as soon as the receiver is turned on you should be able to tune it to the foxes' frequency. For some old receivers (Altai) tuning is fairly touchy, and may need to be adjusted from time to time.
Since you need to be able to discern changes in signal strength as the antenna is swung around, it's generally a good practice to keep the receiver attenuator adjusted so that the signal is fairly weak. This setting avoids receiver saturation, and may help lose some unhelpful responses in the antenna pattern.
Many receivers that are purpose-built for ARDF will provide an 'audible S-meter' to take advantage of the ear's better ability to discern small pitch differences compared to small loudness differences. This feature will have an audio output tone that varies in pitch as the signal level changes. Higher pitch means louder signal.
Especially at VHF the signal from the transmitter may travel along multiple paths. The effect of this propagation may be to give a bearing in the wrong direction--along a reflected path rather than the desired direct path. Also, the multi-path signal may vary in amplitude with movement over distances of about a wavelength. To guard against erroneous bearings from multi-path, it's common to get a trial bearing then take a step or two to the side and make sure the bearing is still the same. Alternatively, move until you're in a maximum signal zone and take a bearing--but this position could still be affected by multi-path. Generally, the best strategy is to take and plot many bearings from different locations on the course. The assumption is that most of them will be right.

In addition to the usual (tuning, attenuator) controls, the Altai has a 'tone' switch that adds a tone modulation to the incoming signal. This function is mainly to help locate unmodulated signals. However, since the Altai is an AM receiver, and the foxes we will be using have frequency modulation, turning on the tone might be helpful. Most users do not use the 'tone' switch.
The 'audible S-meter' function in the Altai is push-button operated, and is only effective when very near the fox. It is also very loud, so if you try it remove the headphones away from directly over your ears.
Finally, the Altai has a 'threshold' switch that decreases the sensitivity of the receiver by requiring a larger signal at the detector. This switch may help sharpen bearings by allowing only the maximum level to pass the detector as the antenna is swung around. Again, most users do not use this feature.

This purpose-built ARDF receiver has many features that can help the experienced user, but may be confusing for the beginner. The advice here is to assume that the receiver has been configured so that it will work OK for the beginner when it's turned on. The unit is turned on by pressing the M key and it's turned off by pressing and holding the M key. When the receiver is turned on, it can be set to the fox frequency and a useable mode by selecting one of the memory preset keys, e.g. 6. This selection puts the receiver into the mode that was decided by the person setting it up, and it should be useable by the first-time hunter.
The attenuator function is automatic, and the current setting appears in the display as 0..8, with 0 being most sensitive or responding to weakest signals. An indication of 8 means you are very near the fox.
Depending on how fast you move, the multi-path environment, or perhaps your preference, the automatic gain-ranging may be distracting. You can temporarily freeze the current gain setting by pushing the R key. Pushing the key again releases the setting to the automatic control. 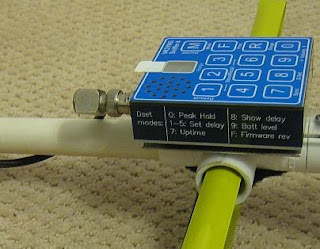 Active Attenuator with handheld (for beginners)

A useful minimal configuration that can be put together fairly simply consists of a directional antenna (3 element Yagi), an 'active attenuator', and a 2m handheld.
The active attenuator is a simple oscillator/mixer with variable mixer injection level—this setup moves the received frequency up or down the band by the oscillator frequency (500 kHz, 1MHz are common) where it's level can be adjusted without interference from the direct signal. There are many examples of these gadgets around and someone probably has a kit available. The one I like best was described in November/1992 issue of QST (and recent ARRL handbooks—e.g., 2009 edition, page 13.30).
Similarly, there are many home-brew examples of Yagis made with measuring-tape elements. These tape-element antennas have the advantage of being robust in the woods, but any directional antenna will serve.