Organizer has offered 4 trainings before the 15 World ARDF Championship. Those have been placed in the forests area cca. 50km around Opatija, on both 3.5MHz and 144MHz, on 8th, 9th, 11th and 12th September. Nick, member of the Team Canada in ARDF has already been in Opatija for the traingings. We have the first reports from Opatija.


Wednesday, Sep-8-2010:
Today was the first training, 80m band. Weather was unbelievably bad, pouring rain and heavy fog - visibility sometimes down to 20m. Transmitters/Antennas/Operators were the ones that will also be used next week. One transmitter failed from the beginning, was replaced by a spare, that failed also. Computer failed because of water in the keyboard. Rough start for the organizers... Some transmitters were 10kHz off the stated frequency, but were strong. The 80m TXs were placed close to the good trails, so it was, except for the weather, an easy hunt. The best Ukrainians finished in 35 Minutes. Other than that the course was easy. Tomorrow will be the first 2m training. Weather should improve, but be prepared for anything next week.


Thursday, Sep-9-2010:
We had the first 2m training. Same area as Wednesday, but much nicer weather, no rain or fog. The terrain was in the mountains, between 1000 and 1200 m high. It was a ski resort area. Dense vegatation, many trails hard to find because of overgrowth. We had a good orienteering map, 1:10000, A4 - so the area was less than 2 by 3 km. Since the Ukrainians complained about the 80m being to easy, for the 2m yesterday 4 of the TXs were placed at the very edges of the map, with lots of vertical meters to cope with. Also, since it was still very wet, there were strong reflections, so a difficult contest. All TXs could be heard from the start both days. One transmitter failed, but all TXs were relatiively weak. They had only one SI-station per fox, but will have 2 at the championship. 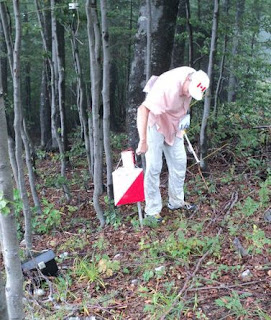 Posted by BCRadioSport - ARDF Canada at 9:34 AM